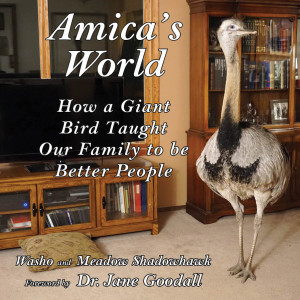 Not really sure where Microcosm are heading with this one. An unusual little book which pictorially celebrates the life of a Rhea named Amica; from birth on a ranch in Oregon in 2014 to present.

The book is basically a collection of photographs of Amica doing his thing and interacting with the Shadowhawke family and pets. There’s very little text, with the exception of the forward by Dr Jane Goodall, a short introduction to Rheas (including some of non-food related uses of Rheas such as weed clearance) and a few annotations to explain the context of the pictures, so this is an ideal book for the younger reader, particularly if they have an interest in animals; but past that I’m not really sure what the target audience is.

There’s a few additional niggles – the interchange between referring to Amica as he/she is a bit annoying and I still wasn’t sure of the Rhea’s sex to the end of the book. Surely someone should have picked this up during the editorial process; and also the bracketed questions, which look more like notes for the author than text for the reader. A bit more information on the family background to keeping Rheas would have been nice too, as there’s little context to the book  Ian Pickens