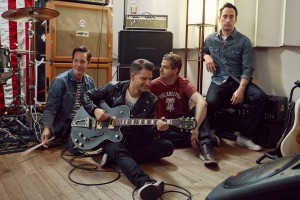 American Hi-Fi are releasing today ‘Golden State’ in a new, acoustic version. The song, originally the second single from the album Blood & Lemonade, is now available worldwide in digital stores.
Purchase it here. Itunes or stream it on Youtube.

Frontman Stacy Jones comments on ‘Golden State’:
“Golden State is a song about starting over. It’s about learning from your past and using that information to forge a new path, a more enlightened perspective. It’s knowing that everything we do and experience, even the moments that seem tough, can ultimately lead us to a better place.”

The Boston outfit, who have been on a “semi-hiatus” over the last few years, will now embark in a series of 3 exclusive shows in America this month, following the sold-out, one-off show at London’s legendary 100 Club in London this past May.

The three-city tour will hit Los Angeles, New York and the band’s hometown of Boston, giving fans a rare opportunity to see and hear American Hi-Fi performing their hits, including songs of the new album. Tickets for all shows are still on sale.

Perhaps best known for the hits ‘Flavor Of The Weak’, ‘Another Perfect Day’ and ‘The Art Of Losing’, ‘Blood & Lemonade’ is American Hi-Fi’s fifth full-length and their first since 2010’s ‘Fight the Frequency’. The record wholly embraces the sound and spirit of classic, balls-to-the-wall guitar rock mixed with the power pop sensibilities that lead to their worldwide smash ’Flavor of The Weak’.