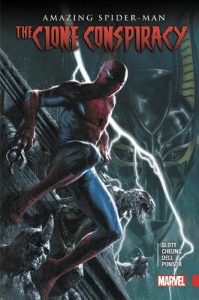 As all roads once led to Rome, all of the recent events in Spidey and Peter Parker’s life / lives have been leading up to this. The Clone Conspiracy is the nexus where everything converges and when the dust finally settles and all is said and done, the wall-crawlers life will never be the same again. The return of the Jackal and his seemingly miraculous process of being able to bring the dead back to life and cure the incurable pushed Pete’s Spider-Sense into overdrive and having sent one of his best friends to investigate, and then lost him, it’s left up to your friendly neighbourhood Spider-Man to swing in and once again try to save the day.  Which in this case, is a lot easier said than done, as the villain of the hour isn’t driven by the usual desire for power, by greed or some overwhelming need for revenge, but rather to right an old wrong and set Spider-Man’s world back on a path whose causeway might just lead him to the inner peace and that he’s been searching for his entire adult life. That combined with the re-appearance of Pete’s ‘first’ love, having to face a virtual who’s-who of Spidey foes who’ve been press ganged into working  for the “bad” guy, discovering that some of his supposedly closest allies have been keeping secrets from him and working to their own (admittedly  noble) agenda, the imminent collapse of all that he’s worked to build, being forced into striking deals with one of his most hated nemeses and the omnipresent slow eradication of his personal life means that Spider-Man, in The Clone Conspiracy, may well be having one of the worst days of his life.  Which, given the way the Parker luck usually seems to run,  means that he’s having a really, really bad day.

But Pete’s bad days are always good news for faithful arachnid fans as they invariably mean that the drama, tension, reveals and excitement that revolves around them is always going to be turned up way past eleven, and in The Clone Conspiracy Dan Slott and Christos Gage crank everything up to the point where the dial gets snapped off and there’s no going back or turning it down. You’ve just got to go with flow. Which they do, dragging their audience along for the ride as heartbreak, action and damn-I-didn’t-see-that-coming moments are tossed out left, right and centre in a mesmeric and addictive tale that serves as a perfect culmination to the Jackal, New U, Clone arc. Slott and Gage bring Pete’s mantra to the fore, as they force their central character to question his most precious ideals as he confronts the bitter side of what power and responsibility mean when offered his hearts greatest desires in an often tragic and unrelenting, but nonetheless captivating, story that queries the human relationship with loss and death and the necessity and consequences of the former and how the latter shapes the way we view the world and our place(s) in it. And, as it always is, Chueng and Camuncoli’s wonderfully detailed and sublime art fires every page and panel straight into the reader’s cerebellum, dazzling the minds-eye with its impeccable partnership of intricate and delicate beauty and raw, explosive violence.  Incredible… Tim Cundle