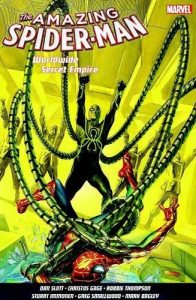 History is littered with ascension and decline of civilisations and the rise and fall of the empires that were spawned, and brought into being, by them. Hubris, greed, natural disaster and social and economic change have all brought global powers to their knees on a multitude of occasions and one of the greatest truisms of humanity is that power is fleeting and eventually, all federations fail. The meteoric growth of Parker Enterprises was matched by its incendiary and speedy collapse, mirrored by the ascension and crash of Hydra’s control of America, and Secret Empire charts the downfall of Pete’s company and Captain America’s “kingdom” and how the fate of both behemoths is seemingly inextricably linked. Unlike Steve Rogers though, Spidey (as he always does) bounces back with, for a man who loses everything, relative ease and proves that what goes down, must in some way, shape or form, also go “up”.

Secret Empire revolves around the struggle for domination and control of Parker Industries between the men who were, and are, Spider-Men and were responsible for creating the company, Otto Octavius and Peter Parker. With the former in the thrall of Hydra and determined to claim what he sees as being “rightfully” his and the latter willing to destroy his company rather than let it fall into the hands of Doctor Octopus and Cap’s Secret Empire the global stage is set for a showdown of epic proportions that culminates in Shanghai in the same ay that everything in Pete’s life always does for him and everyone around him. Badly. But rising from the ashes of Parker Industries, Spidey, back on his home turf, starts to slowly rebuild his life, returning to where everything began, bringing his story full circle, preparing him for a new beginning swinging between the skyscrapers of New York and defending his city from all manner of evil and villainy.

The Worldwide arc was a whole lot of fun while it lasted, but it was always going to have to end as the whole retiring while you’re young enough to enjoy it on an island paradise you own with more money than you can spend in a thousand lifetime’s scenario doesn’t happen to guys like Peter Parker. Oh sure, he’ll get to taste it, have a small slice of the dream, but he doesn’t get to have that kind of happily ever after. Why? Because with great power, comes great responsibility and Pete’s role in the whole big shebang called life is to defend  and protect those who can’t defend and protect themselves regardless of what it costs him personally. And in Slott and Gage’s Secret Empire, it nearly costs him everything as he goes from billionaire CEO with the world at his fingertips to couch surfing at his new girlfriends* apartment before his first love and lifelong passion, with a little help from the infamous Parker luck and destiny**makes sure that once again, he’s where he needs to be. That is, in the right place at exactly the right time for his story to hit reset and begin again.

Unafraid of putting their hero in the firing line, Gage and Slott, also use Pete’s dilemma as a reminder that every action has an equal and opposite reaction, and that a huge, wold changing decision like crashing and burning a multinational corporation has major consequences, all of which are explored, scrutinised and examined on an intensely personal level in Secret Empire. As anyone who’s picked up a Spider-Man book in the last decade will happily testify, Dan Slott is, for all intents and purposes, God as far as the Spider-Universe is concerned. He gets Pete, his friends and foes in a way that few others ever have or ever will, and he continues to wield his deific storytelling powers wisely, bolstered by the incredible art of Stuart Immonen and Greg Smallwood. And with the news that he’s about to leave Spidey behind and move on to other things, we’d all better make the most of Dan Slott’s Spider-Man while we can. Change is in the air, and it all starts here… Tim Cundle

*Yes, Pete’s got a new “girlfriend”. No I’m not going to tell you who it is. Just read the book already.

**Or divine intervention, predestination, fate, karma, the will of the universe, yadda, yadda, yadda. It all comes down to whatever it is you believe in, if indeed you believe in any of that hypothetical and theoretical hocus pocus.