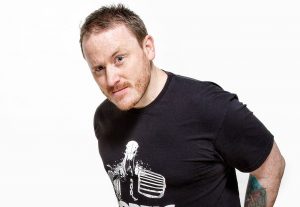 Alec Worley talks about writing the second Realm Of The Damned book, Signum Draconis, out in September from Werewolf Press

MM: How different was it writing the second Realm of The Damned compared with writing the first book?

Alec: Way harder. Not only in terms of historical research, but also trying to fit something into the framework we’d already laid out in the first book. We had to go deeper on the characters too. Whereas the first one was like this Bronze Age-style monster mash-up book, this one had to go into the main character’s motivations for doing the awful things she does. On the other hand, we’ve had a lot more freedom in terms of invention. From the get-go, we wanted to make this much more surreal in terms of horror.

MM: You are working with Pye Parr again. Now you have worked on a sizeable project together, is there more of a rapport than there was with the first book?

Alec: Working with Pye on these books is the closest I’ve ever worked with an artist, and it only benefits the book, I think. We look over each other’s work and spot each other’s mistakes, which helps keep the whole thing as tight as possible in terms of words and pictures. When you’re writing full script and just sending it off into the void, there’s so much in terms of nuance of storytelling that can risk getting lost. But not when you’ve got a close creative partnership like we have here. It helps that we’re both into the same kind of nonsense and both play off each other.

MM: Can you give us the one line elevator pitch for Realm of The Damned Signum Draconis?

MM: Signum Draconis is a prequel to Tenebris Deos. What challenges did that throw up for you with this project?

Alec: It was tough maintaining that crazy operatic tone that a story like this needs. We wanted the kind of exuberance you find in European rather than Western comics. It’s easy to go completely off-the-wall – and we wanted to do that – but we also needed it to be grounded enough to convey Athena’s story: a woman going to insane extremes for reasons even she’s not fully aware.

MM: How much historical research did you need to carry out for the second book?

Alec: Probably way more than I needed to. I spent a good two-three weeks reading up on Eastern European history, then included hardly any of it! I initially wanted to weave the story of Vlad the Impaler into this a lot more, but – again – we had to maintain that balance and not get bogged down in historical fact. I love how in, say, Italian exploitation movies of the ‘60s – historical accuracy goes out the window in favour of just being wild and inventive and having bloody good time. This is set in early 15th century Transylvania, but it’s by way of Hammer Horror and Mario Bava movies, strained through the black metal aesthetic from the first book.

MM: You are a more experienced writer than you were with the first book, so was it easier to write than its predecessor?

Alec: Every project ends up bringing its own set of challenges and this was no different. You always think you’ve got things sussed, but it’s never the case. If anything, this was probably the tougher book, if only in terms of its characters and coming up with mad horrors that Pye was actually capable of drawing! There was one creature design – a huge monster made up of dead bodies – that Pye was cursing me for making him draw! Haha!

MM: Signum Draconis has a female protagonist. How did you find writing a female character at its core compared with its predecessor?

Alec: Don’t ask me why, but I tend to gravitate towards female characters – Durham Red, Judge Anderson, Sisters of Battle. Athena is definitely on the unapologetic grindhouse end of that spectrum! That was the brief from the very start. This isn’t a la-de-da book about the female experience (which I couldn’t write anyway); it’s exploitation horror! Overall, I approached her the same as any other character: Get into her head and find out what makes her tick. In Athena’s case, she’s a psychotic monster, same as everyone else in these books! But here we’re getting to the reason why. She’s an out-and-out villain. The challenge here was to make her if not sympathetic, then at least understandable.

MM: Vampires have been part of literature and fiction for centuries now. What is it about them that continues to appeal to readers?

Alec: The yin and yang of sex and death? The appeal of eternal beauty and immortality? The fancy clothes and great hair? Vampires are such great archetypes to think with. For this book, I wanted to get into the more folkloric aspects of that mythology, their connection to the earth, blood rituals and wotnot. I picked up on lots of lesser known aspects that might key into Athena’s character: lining coffins with earth, blood magic and stuff like that. Lots of pre-Christian stuff.

MM: How different is it writing Realm of The Damned to writing Judge Dredd for 2000AD?

Alec: Probably a lot easier, since we’re free to invent our own world with Realm. Unlike with Dredd and other licenses where you’re hemmed in by all that’s gone before. Dredd is probably a lot more sympathetic than anyone in Realm!

MM: Realm of the Damned is an original graphic novel whereas the other writing work you have done is episodic. What are the pros and cons of writing a single story over a series?

Alec: Having more pages makes things a lot easier! Writing a graphic novel is a completely different beast to writing five-page episodes for something like 2000 AD. It’s like having a canvas instead of a Post-It note. Your vocabulary quadruples for a start, allowing you to play with transitions and create a much deeper atmosphere. There’s a lot of horror techniques I was able to bring to bear, thanks to this being a graphic novel. With a single story, you can also bring everything full circle in terms of theme and certain payoffs, rather than having to find a way to keep a series going.

Realm of the Damned: Signum Draconis is published by Werewolf Press and will be available from comic shops, book stores and the interwebs on September 6th