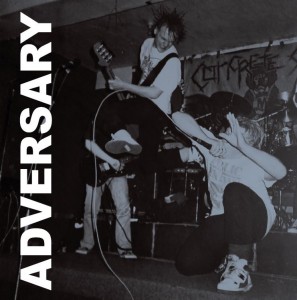 Early in the 1980s a band called Discharge helped plant the town of Stoke on Trent on the punk rock map. Some years after, melodic hardcore kings Exit Condition would pick up the torch and eventually passed this onto emo pioneers Spy Versus Spy. At some point in between the star that was Adversary shone brightly and briefly, before getting snuffed out without having a proper release to remember them by. This disc collects their two demos from 1989 and 1991, with the latter being far more interesting. Adversary played shows with the likes of Bad Religion, Sleep, Sofa Head and Exit Condition and similarly to all of the above, they used hardcore punk rock as the core of their sound, but went down their own path rather than trying to emulate anyone else. As well as having a melodic hardcore sound, they were not afraid to introduce more progressive, introspective elements that bring to mind the likes of Crane or Nerve Rack. Not an essential release by any means, this is still an enjoyable trip down memory lane. Tom Chapman