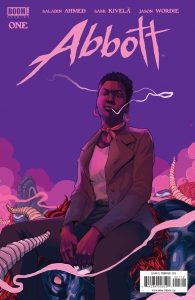 BOOM! Studios is proud to announce the release of ABBOTT #1 SECOND PRINTING VARIANT on the same day as ABBOTT #2 in February 2018. The new hit series from Hugo Award-nominated writer Saladin Ahmed (Marvel’s Black Bolt, Throne of the Crescent Moon) and artist Sami Kivelä (Beautiful Canvas) sold out at the distributor level before it went on sale after earning buzz as one of 2018 most-anticipated new comics. ABBOTT #1 SECOND PRINTING VARIANT features a new cover by Taj Tenfold (Sisters of Sorrow).

ABBOTT transports readers to the gritty world of 1970s Detroit, as a female journalist of color named Elena Abbott investigates a series of grisly crimes the police have ignored—crimes she recognizes to be the work of a dark magical force—the same force that murdered her husband 10 years ago. As she looks for clues, Abbott puts herself in the crosshairs of a mysterious power out for more blood, all the while navigating a harsh social environment that’s structured to protect the powerful, and prevent access to change.

“ABBOTT puts a mirror up to the injustices and inequalities that plague our society – and have for decades,” said Eric Harburn, Editor, BOOM! Studios. “We’re thrilled to see Saladin, Sami, Jason, and Jim’s powerful work resonating with readers not only because of the deeper message, but also because of how instantly they’ve becomes fans of Elena Abbott herself.”

Print copies of ABBOTT #1 SECOND PRINTING VARIANT and ABBOTT #2 will be available for sale on February 28 at local comic book shops (usecomicshoplocator.com to find the nearest one) or at the BOOM! Studios webstore. Digital copies can be purchased from content providers, including comiXology, iBooks, Google Play, and the BOOM! Studios app.