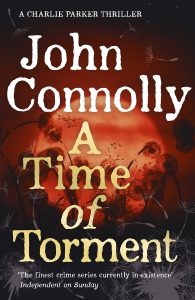 Charlie Parker is back, and he’s on a mission.

A Time of Torment marks the fourteenth novel featuring detective Charlie Parker. Now recovered after the events detailed in the previous two novels in the series (A Wolf in Winter and A Song of Shadows), Parker is different. No longer conflicted about his role in the world, he has a new focus and determination; something all too clear to those who know him.

Jerome Burnel has just been released from prison on parole; convicted of a crime he swears he didn’t commit. He seeks out Parker, determined to tell his story and get the detective’s help to clear his name. He doesn’t expect to live to see this happen.

When Burnel disappears, Parker is moved to find out the truth – abetted by his companions Angel and Louis – and his journey ends by taking him to The Cut. A remote community in West Virginia that is a law unto itself, he believes this place will reveal the secret of Burnel’s downfall, and the secret that is the Dead King.

There’s a real sense that Parker has changed in this novel. Having survived the injuries received in A Wolf in Winter and come through the other side, he’s a very different man. No longer does he agonise over the right and wrong of his actions, whether he’s really acting for the forces of good – now he’s intent on eradicating evil wherever he finds it, and doesn’t waste time over how or why. His companions Angel and Louis believe in him as always, but the police and other agencies he works with now and then aren’t so sure – worrying about how far he’ll go in the pursuit of justice. As always, the author has written a beautifully realised tale of Burnel’s wish for redemption, and of Parker’s quest to find the truth. The locale of The Cut is vividly drawn, and a palpable sense of desolation pervades the scenes set there.

With A Time of Torment, the series sees possibly its strongest volume yet – if you weren’t a fan of Parker before, you will be after reading this. Marie O’Regan