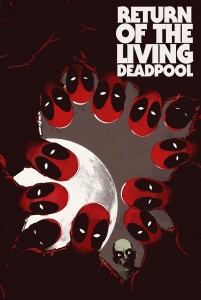 Prepare for pools full of undead Deadpools as RETURN OF THE LIVING DEADPOOL #1 shambles in to comic shops this February! Blockbuster writer Cullen Bunn (Magneto, Deadpool Kills The Marvel Universe) joins Marvel newcomer Nik Virella take you to a world overrun with undead Deadpools – each with a snarky mouth of its own.

To stop the zombie apocalypse, Deadpool used his own healing factor to save the world. Only any zombie that ate Deadpool…transformed into another Deadpool. Believe us – hordes of Deadpool’s might just be worse than hordes of flesh-hungry monsters.

“So there are thousands of Deadpools, all of them originating from the one and only Wade Wilson,” says Bunn in an interview with Marvel.com. “Every time a zombie takes a bite of one of these Deadpools, the zombie becomes Deadpool. You know how Deadpool has numerous personalities? Well, these newly created Deadpools start to latch on to different aspects of Deadpools split psyche, forming factions. And these factions don’t get along!”