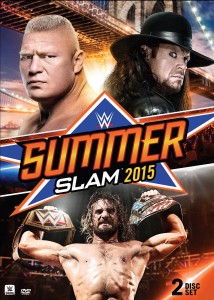 WWE: Summerslam 2015 (WWE DVD)
You really only need to know one thing to make you go out and buy this DVD: Lesnar/Undertaker II.  This is the first time Undertaker has the opportunity for a rematch against the man who ended his twenty-one year Wrestlemania winning streak, Brock Lesnar, and the result is a match billed as “too big for Wrestlemania” that feels exactly like that, giving the whole of Summerslam a big match feel.  That feeling is furthered by having celebrity host Jon Stewart kick off the show, and the lively Brooklyn crowd, already on fire from the previous night’s stellar NXT event, add an energy to the proceedings that doesn’t let up across the full four hours.  That’s right — this year’s Summerslam is joining Wrestlemania at the four hour mark, further lifting the event’s prominence and sense of importance.
There are many highlights in this action-packed show.  Most surprising of all is the involvement of actor, Stephen Amell, who wows the crowd with his in-ring debut, teaming with Neville against the dastardly Stardust and King Barrett.  Cesaro and Kevin Owens put on a clinic before the main event, and the Fatal Four Way match for the Tag Team Championship is a jam-packed riot of high spots and fun.
Both main events — the aforementioned Lesnar/Undertaker II and the “Winner Takes All” match between United States champion, John Cena and WWE Champion, Seth Rollins — are entertaining, with plenty of edge-of-the-seat moments.  But both suffer from slightly dodgy finishes which leave a bad taste in your mouth.  Jon Stewart’s involvement in the “Winner Takes All” match is near-unforgiveable in its sheer arbitrariness and inconsistency (Stewart previously had a TV feud with Seth Rollins, but decides to help him here?)  And the lame did he/didn’t he ending of Lesnar/Undertaker sullies their feud somewhat.  Sure, it made us want to tune in to Raw the next night and see what happened, but as far as an ending to the “biggest event of the summer” it just leaves you scratching your head.
Still, fifteen seconds at the end of each match can’t entirely take away from the preceding fifteen minutes of awesomeness, so even with the sour taste its not enough of a sour taste to diminish the overall enjoyment.  Likewise, the less successful matches would have been main event quality on any other show, they just don’t quite live up to the expectation and hype of this particular Summerslam.  The three-team divas elimination match, for example, feels rushed and lacked the “wow factor” we were all expecting from the build up to this “Divas Revolution”, despite being a very good match.  And the Wyatt Family versus Ambrose and Reigns, though a fine match, feels too much like filler in the middle of an interminable and largely uninspiring feud.  Sheamus and Randy Orton probably had the best match together they have ever had, but they have had matches together about a million times in the last two years and it’s hard to get excited about Chapter one million and one.  Likewise, Dolph Ziggler and Rusev do what they can with a lousy finish and even lousier storyline, and five minute is more than enough to watch Ryback’s perfunctory intercontinental title defense against the Big Show and The Miz.  Perhaps Summerslam didn’t need the extra hour in the end, but there is enough excellence here to make up for any of the low notes.  And with Undertaker sightings getting more and more rare the closer we get to the Dead Man’s retirement, any event that features the Phenom in action are well worth spending some money on.  Dan McKee