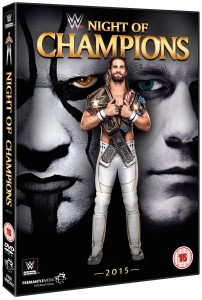 Let’s be honest wrestling fans — when Sting made his triumphant return to WWE at Survivor Series 2014 and dropped Triple H, we all got goose bumps at the thought of his impending “Wrestlemania Moment”.  Perhaps a match with Triple H was not exactly the Undertaker dream match we had all been holding out for year after year, but it was something: Sting — the one that got away — was going to step foot inside a WWE ring for the very first time.

But when the match happened, though it was undeniably cool, Sting’s return kind of got lost in the shuffle of DX and NWO returns that also featured in that match, and the loss to Triple H was not exactly the triumphant Sting victory we were all anticipating.  Indeed, the night after Wrestlemania, Sting’s return felt rather flat.  Here he was — the icon, the man who had defeated The Authority, the man Triple H was seemingly terrified of — and yet when it came to the actual match, not only did he not get the job done, but the most memorable moments came from run-ins from other people.

So it was a delight, the night after Summerslam 2015, to see Seth Rollins’ championship statue unveiling interrupted by the now-familiar squawk of a crow and have Sting — not seen on WWE television since Wrestlemania — return and challenge the champ to a match at Night of Champions.  It was even more delightful still, to see some of that old Sting personality return in the weeks building up to the event, as Sting cut promo after promo on Rollins.  This was the Sting I had been waiting for since Survivor Series!

The match Sting and Seth Rollins have at Night of Champions is definitely a match of the year candidate, and considering Sting got badly injured during the match (but still valiantly fights on to the match’s conclusion) it is very possible this could also have been Sting’s last professional wrestling match of his career.  For those reasons alone, Night of Champions 2015 is worth buying.  But the great thing about Night of Champions is that, with every WWE title on the line, the main event WWE Championship match is never the only must-see match on the card.  The 2015 edition has the added bonus of Seth Rollins’ match against Sting being his second match of the night, as the Architect of The Shield also puts his United States title on the line against John Cena mere minutes before his world championship encounter.  We also get the long awaited Divas title match between Charlotte and Nikki Bella, Ryback defending his Intercontinental Title against Kevin Owens, and the tag team champions, The New Day, defending against a returning Dudley Boys.  Alongside every WWE title being defended, Night of Champions 2015 also features a filler match between Dolph Ziggler and Rusev (remember: the interminable Lana/Summer Rae storyline?), and strange bedfellows Roman Reigns, Dean Ambrose and, for one night only, Chris Jericho, against the new, Braun Strowman edition, of the Wyatt Family.  The fun kick-off match is also included here — a six-man tag match between the Cosmic Wasteland (The Ascension and Stardust) and The Lucha Dragons and Neville.

All in all, the matches not involving Seth Rollins are still excellent, and the ones in which he does compete are matches you will want to watch again and again.  Night of Champions, as the name suggests, is an event hugely dependent on the calibre of defending champions at the time of the Pay-Per-view.  In 2015, with solid champions defending titles we have been made to care about, Night of Champions was a huge success — entertaining as both a piece of history, and as a wrestling pay-per-view.  This should be on the Christmas list of any modern wrestling fan. Dan McKee