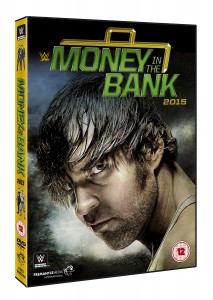 WWE Money In the Bank 2015 (WWE DVD)
The 2015 instalment of WWE’s annual Money in the Bank was a solid event, which stands up to repeated viewing. Indeed, watching this for the second time as reviewer, not live, I was once again rewarded with watching a WWE event free from the baggage of expectation, and subsequent disappointment, of wanting certain individuals to win or lose their matches. When MITB 2015 first aired, I remember leaving my couch with a bitter taste in my mouth, uttering the confused word — “Sheamus?” — over and over again in my mind. This was closely followed by — “John Cena? Nikki Bella? Rollins?” But watching again on DVD, the disappointing history was already written, and could not be changed. Instead, you can simply enjoy the moments before the disappointments for what they are, and even, in some cases, see the apparent disappointments at the time for the stepping stone to greater future plans that they were.

As an event in itself, MITB 2015 has two stand out matches — the sequel to John Cena versus Kevin Owens is just as exciting as the first battle the two had, and — as with Elimination Chamber one month earlier — well worth the asking price for this match alone. In the main event, Seth Rollins and Dean Ambrose continue to show that they simply cannot have a bad match together no matter what terrible finish the WWE writers have in store for them. In this particular match, that finish is a real stinker, primarily because his entire near-miss programme with Rollins appears to have left Ambrose floundering after being one of the hottest superstars in the company, but right up until the cheap ending these two give it their all.

While the MITB match itself is always an annual spectacle, WWE seemed to forget this year that the main ingredient to our enjoyment in it is wanting to root for a favourite to win it. With Ambrose wasting his time in the main event with Rollins, the motley crew of contenders leftover did not exactly feel electric. Traditionally, the point of MITB is to elevate someone new from the undercard up into the world title picture. As a consequence, it seemed unlikely that former Wrestlemania main eventers Roman Reigns or Randy Orton were ever going to win the briefcase — especially with Randy having already won it before quite recently. There was no way the tiny Neville was going to get the opportunity, despite his pedigree as former NXT champion. Vince McMahon doesn’t dress you in a cape and make you a children’s superhero if he sees you as a world champion.

That left the always disappointing Dolph Ziggler, who had also won it once before, perennial mid-carder Kofi Kingston, and the current version of Kane, so deep into the winter of his career that he doesn’t even bother getting dressed in wrestling gear to fight anymore.
Every pore in your body, therefore, can see the writing on the wall as soon as Sheamus appears, and as a result the crowd wasn’t as into this match as they could have been were there a genuine element of excitement involved.

That excitement comes when Bray Wyatt appears out of nowhere to ruin Roman Reigns’ chances at winning the match, the crowd erupting out of their near coma. Unfortunately, their disappointment is palpable when Wyatt leaves the ring without, as we all hoped, ascending the ladder and stealing the briefcase.