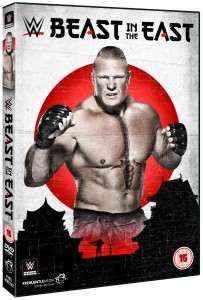 WWE: Beast in the East – Live in Tokyo (WWE DVD)
What began as a WWE Network experiment — live-streaming a random live WWE event from Japan — is now released on DVD to reach a wider audience.  Billed “Beast in the East” due to it featuring Brock Lesnar’s return to Japan for the first time since re-joining WWE, it does feel slightly weird that the headlining Lesnar match happens fairly early on, against Kofi Kingston of all people!  But early and sleight though it may be, it is an entertaining piece of work and certainly turns Tokyo into Suplex City for the few minutes before the inevitable F-5.  Likewise, the main event that closes the event — a standard house show tag match pitting two top faces (John Cena and Dolph Ziggler) against two heels (I hesitate to use the word “top” here as the heels in question are Kane and King Barrett) — is good enough, but not nearly as compelling as the far more main-event feeling NXT championship match between challenger, Finn Balor and champion, Kevin Owens.  Indeed, for the championship match WWE pull out all the stops, with traditional Japanese streamers flooding the ring and flowers given to the contestants.  The match itself is a contender for match of the year, and for my money is worth the price of the DVD alone.
Alongside the three main event matches above, the rest of the card is solid, with the WWE superstars and divas raising their game in front of the Japanese — and network — audience.  A triple-threat match for the Divas championship sees Paige and Tamina Snuka force Nikki Bella to actually have a decent match, and the return of Chris Jericho to WWE screens against the awesome Neville is an unrestrained crowd-pleaser.
The DVD release includes matches not previously broadcast on the network special, making it worth buying even if you are a network subscriber with access to the main show on demand.  Cesaro and Diego from Los Matadores work well together in front of the live crowd, and The New Day and Lucha Dragons also put on a fun match.
All in all, this somehow goes beyond regular house-show fayre and feels good enough to be a standalone pay-per-view event, especially with the exceptional NXT title match.  If you missed this the first time round, run, don’t walk, to buy it now on DVD.  Dan McKee