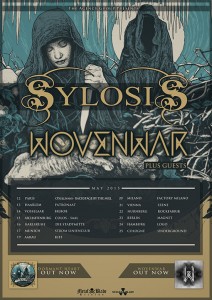 WOVENWAR are excited to return to Europe in May for a club tour as direct support to SYLOSIS!

Comments the band: “If we lads in Wovenwar had a pence for every great show memory experienced in the Europe, our trousers’d be loaded with one or two quid… each. Off our trolley’s in enthused anticipation of our upcoming tour, we look forward to performing many more wonderful moments with you lot. Cheers!”

WOVENWAR will also play five headliner shows in the UK!

Make sure to check out the latest video from WOVENWAR “Death to Rights”. The clip was directed by Josh Klein and Nick Hipa. Check it out now HERE.