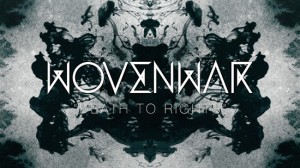 WOVENWAR are extremely excited to partner with Loudwire to exclusively debut their amazing, new music video for the track “Death to Rights”. The clip was directed by Josh Klein and Nick Hipa. Check it out now directly at Loudwire.com.

Phil Sgrosso (guitars) states: “Here is our new music video for our song, ‘Death To Rights’. The clip is mainly performance based and incorporates manipulated imagery relating to our album art. We are stoked to share it with you all. See you soon.”

WOVENWAR continues their North American touring onslaught alongside In Flames and All That Remains on the “Charming America” tour, which kicks off on Feb 20th.

Please visit facebook.com/wovenwar for all additional information and live dates.