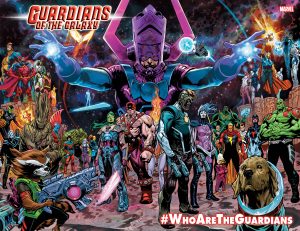 It’s the story you’ve been waiting for…a culmination of the epic cosmic tales that have been masterfully spun by two of the industry’s most acclaimed creators…and it’s all led to this – a brand-new team of Guardians that only the masterminds of Donny Cates and Geoff Shaw can put together!

This January, the creative team that brought you Thanos will bring a new GUARDIANS OF GALAXY series to readers!

“Geoff and I have some INSANE plans for our first Guardians arc,” Cates told Marvel.com. “This arc is called ‘Endgame,’ and as seen in Thanos Legacy, it begins with the reading of Thanos’s last will and testament. An artifact that Thanos’s brother Eros dug out of his late brother’s heart, which very well may spell doom for the entire universe.”

Who will survive the Infinity Wars to join the team?! Who will be chosen to be the newest members of the Guardians? The mystery is building! And in January, all will be revealed…

Don’t miss the all new GUARDIANS OF THE GALAXY, debuting in 2019!