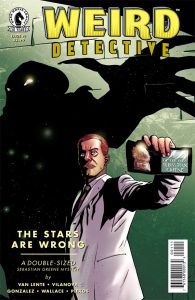 There’s a wonderful air of eeriness within this book. I think it may come from the harsh realism which forms a stark contrast from Vilanova’s inks. It offers up an air of grounded realism and it’s perfect. Lente’s story just offers more potency to that feeling throughout this debut issue. Wallace’s use of colour adds an enormous amount of depth to this book; purple tones appear again and again whenever something strange and other worldly unfolds in the story. Greene is anything but human in this tale and as Dark horse’s write up of this comic suggests ‘It takes a monster to catch a monster’.

The tone is perfectly set in this maiden voyage with an underlying, sinister feeling throughout. But it is not without its comedic moments (be sure to check out Greene’s relationship with his cat). Sana Fayez offers up as a strong and interesting supporting role for Greene perfectly riffing on modern society. Although in some ways this comic feels a lot like a procedural detective drama on the surface, once you get to the end of the issue, it becomes apparent that that notion couldn’t be further from the truth. A really interesting debut and  a series that I look forward to seeing much more of…  Drew Hamley