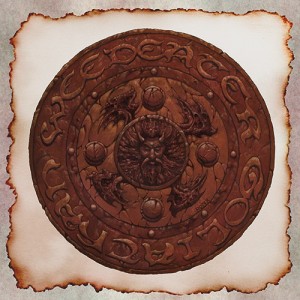 Weedeater – Goliathan CD (Season Of Mist)
With their fifth offering, the Southern sludge outlaws, have finally returned proclaiming another bass heavy, super-fuzz riffed-up album of non-stop intensity from start to finish. ‘Goliathan’ may have some slower moments compared to forerunning releases, but the shear weight of the tracks ‘Claw Of The Sloth’ and ‘Cain Enabler’ smash a delightful groove. Don’t expect anything pretty from these boys, their dirt-ridden homage towards the Southern tinge is thorough throughout the entirety of this album; hell, even ‘Battered & Fried’ has potential to becoming a home state anthem. On the other hand, with ‘Bully’ the trio pull out all the stops and deliver what is probably the fastest Weedeater song of their career, chaotic and fuzzed to fuck. It has to be said that Weedeater make no compromise with their sound, and they probably don’t care what you think. Y’all be pleased to know that ‘Goliathan’ blows your mind harder than a whiskey soaked weedathon! Mark Freebase