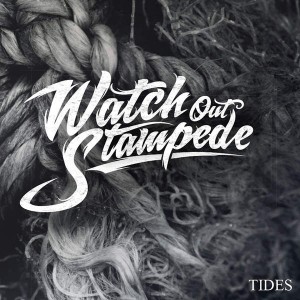 Watch Out Stampede – Tides (Noizgate)
A year doesn’t seem that long in a lifetime, but for Watch Out Stampede it has made the difference between a young band starting out, carefully releasing their debut ‘Reacher’, and the confident mature group that now throws ‘Tides’ out in the open. Diverse, melodic, modern and angry at times, they sound like a mixture of Boysetsfire and the best of new(ish) American metal bands like Killswitch Engage. Never afraid of voicing their emotions or opinions, every song takes on this world with such boldness it’s almost uncalled for. That confidence and the will to play their songs, regardless of what outsiders might think gives them that boost they needed to make it big. The confidence also made sure this German band could trim some excess fat to make the songs a lot leaner and pointier. Martijn Welzen