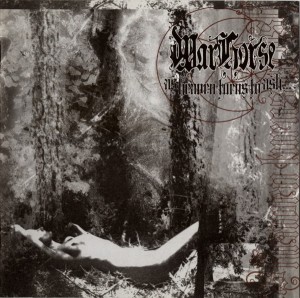 Warhorse – As Heaven Turns To Ash CD Album/ I am Dying 7” EP (Southern Lord)
Not the UK hard rock band from the 70s but the Massachusetts Doom/Sludge band from the 90s, with a long overdue reissue of their 2001 debut album. Deceptive opening instrumental ‘Dusk’ gives way to the alternatingly trippy and bone breaking heaviness of ‘Dooms Bride’ which clocking in at 9:20 is pretty indicative of the rest of the album. It’s quite reminiscent of Cathedral’s first two albums particularly in the vocal section and the underlying groove behind the heavy vibe, although the band also delve a little deeper into prog/folk/psych territory such as on the instrumental ‘Amber Vial’ and there’s even a hint of Soundgarden on ‘Every Flower Dies No Matter The Thorns (Wither)’. Southern Lord are spoiling you Doom fiends by also re-releasing the bands final two track ep ‘I am Dying’ from 2005. Both long out of print and bona fide classics of the doom/sludge genre, so make the most of this opportunity and pick these up while you can. Ian Pickens