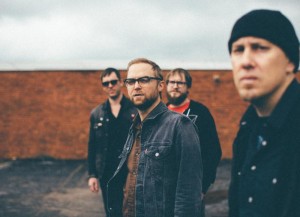 Magic Bullet Records has locked down November 20th as the official release date for One Foot In The Flesh Grave, the debut LP from Durham, North Carolina-based WAILIN STORMS.

WAILIN STORMS creatively merges doom punk and swampy rock, led by ominous, blues-driven vocals reminiscent of Danzig and Samhain, while musically carved from the Southern American East Coast with emotive nods to Destruction Unit, Clockleaner, Unsane and Pussy Galore. The band’s output is incessantly passionate and harrowing in its entirety; think the Murder City Devils… but if they actually murdered people under possession by the god-damned devil. Following 2011’s Bone Colored Moon and 2014’s Shiver EPs, the band now prepares to unveil their sprawling full-length recording.

WAILIN STORMS‘ One Foot In The Flesh Grave serves as a warning shot to all things safe, prescribed, and banal; the band’s deep, dark, swampy and catchy-as-all-hell new material bears seven hymns for the ongoing funeral procession of everyday life. Crossing its path bestows the karmic powers of a black cat in reverse. Recorded and mixed at Warrior Sound, by Al Jacob and mastered by Carl Saff, the bold production of these seven tales pushes the bending, wayward guitars and thick rumbling of the percussive end out heavily alongside the nonstop dynamic lead and supplementary vocal performances. Completed with artwork by Bruno Guerreiro of Decibel magazine, One Foot In The Flesh Grave will help make WAILIN STORMS a household name to all as the album makes its grim rising this harvest season.

Magic Bullet Records will issue One Foot In The Flesh Grave on all digital platforms as well as both red and clear vinyl pressings on November 20th. Audio previews, an official video and more on the album will be unveiled in the days ahead. Vinyl preorders are also still pending, but digital preorders are available early at Bandcamp HERE. And if you missed it, the album trailer is playing RIGHT HERE.

One Foot In The Flesh Grave Track Listing:
1. Don’t Forget The Sun
2. Ribcage Fireplace
3. Mystery Girl
4. Walk
5. Lost
6. Light As A Feather, Stiff As A Board
7. German Fur Tails

Having spent a sizable portion of September on the road touring the East Coast in advance of their new works, WAILIN STORMS continues to book new live performances, with a hometown record release show in Durham alongside Fleshwounds upcoming on October 23rd, a set at The Fest 14 in Gainesville, joining Andrew W.K., Cult Leader, Government Issue, Iron Reagan, Lagwagon, Modern Life Is War, Title Fight, Young Widows and dozens more, and other shows currently solidified.