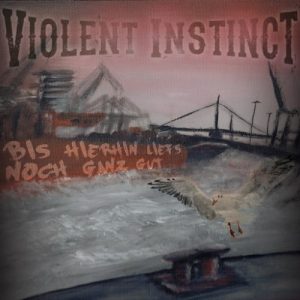 This is the perfect example of how first impressions can be deceiving. For a band named Violent Instinct putting an album out on Spirit Of The Streets, I was expecting some hard as nails, boot-meets-face type oi! But from the outset, vocalist Aga’s melodic style puts paid to that. The Violent Instinct sound involves straight-forward streetpunk, with hints and nods to the Hamburg punk rock old school; the catchy powerful female vocals being the cherry on the cake that sets this band well apart from the masses.  There are some nice guitar licks here and there but by and large it is the vocals that carry the sound. Comparisons have been made to Cecilia from Baboon Show but I’m not familiar with them so can’t comment. For me, Aga’s voice is along similar lines as Beki from Loaded 44, tuneful yet commandeering and compelling you to carry on listening. With the song “Keinen Meter” the band makes a strong anti-fascist statement, which is always a plus in my book. 12 Songs and all but one are sung in German. Altogether a powerful and promising debut album. Tom Chapman