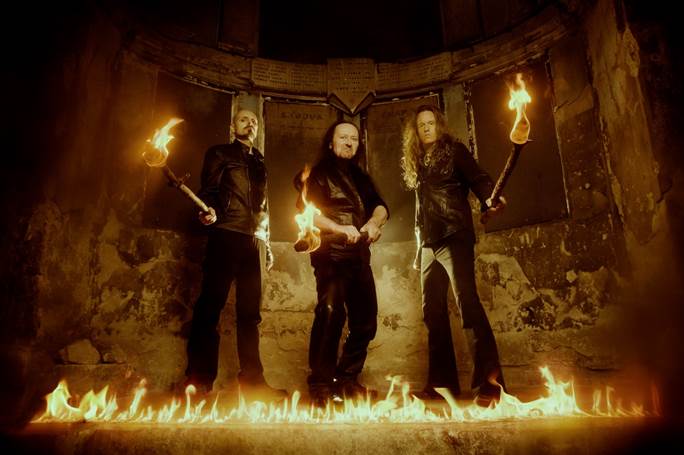 LEAD TRACK FROM THE BAND’S NEW ALBUM, ‘FROM THE VERY DEPTHS’, RELEASED VIA SPINEFARM RECORDS ON JANUARY 26th…

VENOM, the hugely influential British heavy metal trio widely revered for driving and shaping the darker side of extreme music, return to the fray with the lyric video for ‘Long Haired Punks’.

This track – the first new music from the band since their ‘Fallen Angels’ release in 2011 – is taken from latest / 14th studio album, ‘From The Very Depths’, released January 26th (on CD & download) via Spinefarm Records; a double vinyl version will follow shortly after, also on Spinefarm.

Venom – vocalist / bassist and original member, Cronos, plus guitarist Rage and drummer Dante – have long delivered their music with an underground punk spirit, a blending of styles and stance documented in ‘Punk’s Not Dead’ from ‘Fallen Angels’, and continued now with the nefarious blast of black noise that is ‘Long Haired Punks’.

This ethos is further reflected in the production of the new album, overseen by evil mastermind Cronos, which has been kept real an’ raw for maximum impact.

Says Cronos: “This album is perfect; all three members are totally over-the-top confident with the new songs and the production. We had a great atmosphere in the studio while we were recording; Dante created pure thunder from his drums, while Rage tears the flesh off your face with his riffs, making everything fall into place so well… it shows the band maturing into an unstoppable force of pure Black Metal. We can’t wait to play the new songs live for the Legions… Hell Yeah!”