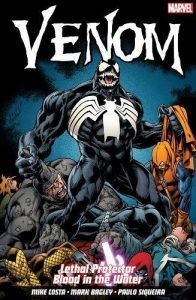 One Venom, two Venom, three Venoms, four, five Venoms, six Venoms, seven Venoms more and…  You get the picture. Thanks to Venomverse there’s a whole lot of Venoms out there, but in my book, there’s only ever been two that really matter. Eddie Brock and Flash Thompson and now that the symbiote is back with the former and having learned how to be a hero from the latter, it’s time to start a whole new chapter in the deadly duo’s story as Eddie and Venom try their utmost to be bad guys doing good. While this means considerably less* brain munching, there’s still a fair amount of bone crunching as Venom tries to find his / their place in the world as a street level vigilante.

As they attempt to come to terms with their partnership and what each has discovered about themselves in the time that they spent apart, they find that while the world as a whole still thinks of Venom as a monster, in its forgotten, darkest corners, there are some who regard him / them as a hero and saviour.  And in the bleakest moment of the history of those who see Venom as he really is, the only one who stands up for those forgotten souls against those who would hunt them to extinction, is their chosen one Venom, proving that heroes come in all shapes, sizes and guises.  But that’s not all folks, because life is never a bowl of cherries for Venom and his / their destiny has always been beset by choppy oceans and rough seas and his / their moment of triumph looks like it’s going to extremely short lived and spoiled by the re-emergence of a face from the near past that neither symbiote nor Eddie ever thought that they’d ever bump into again.

Mike Costa, having been handed the Venom shaped ball by Marvel, is running with it all the way to touchdownsville and back again. He’s the unseen third party in the Venom extra-terrestrial / human symbiotic relationship and he gets both Eddie and the object of his affection perfectly. Blood in the Water is a character study of the” heroic” partners that digs deep and strips both bare, peeling back layer after layer of Venom in order to discover the symbiote and Eddie are together, who they are individually and why they work so well together. It’s a strange and weirdly endearing love story of two beings who complete each other, that thanks to an enormous team of artistic talent, has it’s own look, flavour and feel.  And with Costa and his compadres at the helm, Venom really is going from strength to strength and getting better with every issue. Chuck Norris was right. Good guys really do wear black… Tim Cundle

*Which is nice way of saying that no brains were consumed. None. Nada. Zip. Zilch.