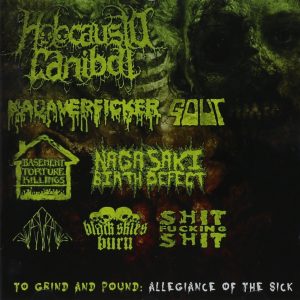 In an underground bunker, somewhere far away, surrounded by an arsenal of nuclear missiles, a multitude of tomes on torture and the many ways in which a person can be killed and centuries old paintings depicting people doing nasty, but strangely titillating, sex things to each other, eight bands gathered to finalise their plans for world domination and destruction. ShitFuckingShit, Basement Torture Killings, Holocausto Canibal, Kadaverficker, Nagasaki Birth Defect, Black Skies Burn, Judas Cradle and Gout cast their souls into the pit of collective darkness and delivered a symphony of flesh tearing, face ripping ear melting grind and power violence infested HC the likes of which the world had never heard. And verily as the Earth slowly choked, trapped in clouds of poisonous greenhouse chemicals and banal, tedious and pathetic right wing rhetoric, the bands played on and offered the faithful an escape route. If all else failed, they could slam their way to paradise with To Grind and Pound, a maelstrom of precision, power and speed guaranteed to dispel even the bleakest of woes in an orgiastic burst of thrashtastic mayhem. Fuck the world. Bring on the grind… Tim Cundle