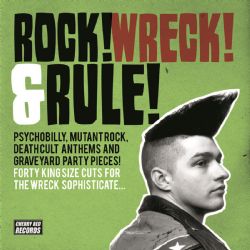 V/A – Rock! Wreck! & Rule! 2CD (Cherry Red)
This double cd is the perfect compilation for people like me, who like the occasional psychobilly song, but are not die ­hard enthusiasts of the genre. Forty undead tracks can grace your ears while you dive into the liner­notes with extensive descriptions of each song, and the original records they came on. This way it also makes a nice starting point for a younger audience not, yet, familiar with this dark and twisted version of good old-­fashioned rock n roll. Plenty of familiar names give ‘Rock! Wreck! & Rule!’ the weight it needs. The Meteors, Demented Are Go, Guana Batz, Necromantix, Frenzy and Long Tall Texans give me the right dose of graveyard anthems to get through the day. Martijn Welzen