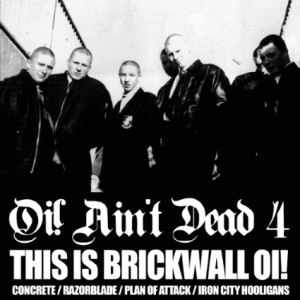 V/A – Oi! Ain’t Dead Vol. 4 LP/ CD (Rebellion)
This could be described as a four-way tag match of no-rules, no-holds-barred aggression that spills out from the ring and into the streets. All four bands on here are exponents of the harder oi! style. I mean, the bands are called Iron City Hooligans, Concrete, Plan Of Attack and Razorblade – that’s not exactly got you thinking sugar oi has it?! Concrete kickstart the match with their three songs which are very much in the vein of their debut “We are all Subculture Streetfighters” – a US oi! sound with quite a big hardcore touch, think Blood For Blood. As well as two originals Concrete treat you to a cover of “This Is Rock’n’Roll” originally by The Kids, which works really well and is an inspired choice of cover. Razorblade are up next and they contribute what I think will be their last recorded songs, as they get set to call it a day. I think on their more recent recordings Razorblade have taken things back to basic and given us some ripping rock’n’roll, albeit hard as hell with guttural vocals accompanying the oi oi sound. Over on the other side of the disc and taking a quick trip down under, Australia’s Plan Of Attack keep up the pressure. Although they are possibly the most straight-forward oi! sounding band on here, they have the same gravel-chewing vocals that the other bands have and once again they remind me of Gundog. They contribute one original, a great Runnin’ Riot cover song and tribute to singer Colin (RIP), and a cover of Cock Sparrer’s “Riot Squad” – I think I’d have preferred another Plan Of Attack original here if I’m honest. After those three heavyweights, Iron City Hooligans take one last look around the arena and make sure that no-one is left standing, with a sound incorporating metal guitars and hints of The Bruisers. Not for the faint hearted! Tom Chapman