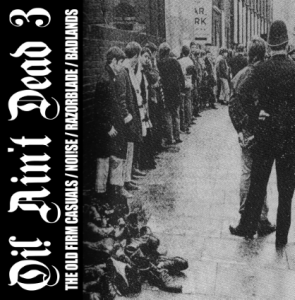 V/A – Oi! Ain’t Dead Vol.3 7″ (Rebellion)
This little comp brings together four of the bigger names in the US and Dutch scenes right now to offer a worthy continuation of this fine series. Side USA features Old Firm Casuals and Noi!se. OFC’s contribution “American Dream” ironically has quite a European sound to it, almost sounding like one of those melodic stomping anthems that Discipline are known for. This is an uptempo tune that sets the record off to a fiery start. Noi!se are one of my current faves and I can’t wait to get my hands on their album that dropped recently. They have a massively melodic uplifting sound, and this song is no exception. Flip the beast over and it’s time for the Dutch attack of Razorblade and Badlands. The Razorblade track is in keeping with their recent releases, hard and direct with those gutteral vocals and guitars that bang out straightforward melodies – a killer combination. I’ve been kicking myself for a while not that I cottoned onto Badlands late in the game, and this song is another perfect example of what I have been missing. Probably the most technically proficient of the oi! bands I’ve heard, but they keep things catchy and down to earth. I’ve said it before, but I’ll stick by my words that these are an oi! version of Bad Religion – great catchy songs that lodge themselves in your ears. Collectors don’t miss out on coloured vinyl versions of this great disk. Tom Chapman