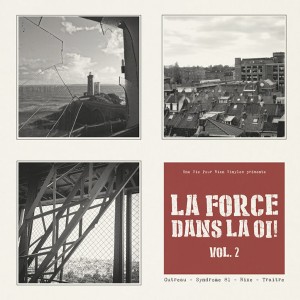 V/A – La Force Dans La Oi! Vol.2 7″ (UVPR Vinyls)
UVPR continues in their single-minded vision of documenting the French streetpunk and oi! scene with this new compilation showcasing the talents of the next four bands to hit the streets. I’ll start with side B which has some names I am already familiar with. Outreau have already proved their talents with their debut EP and the follow-up record which has just dropped. Their contribution to this record is a prime example of their sound, blurring the lines between primitive 80’s hardcore sounds and rough oi! Also on side B, Rixe is a name I have been keeping an eye on for a while and finally I get to hear them. Suitably paired with Outreau, the Rixe sound is similarly primordial, with drums, bass and guitars hammering out a couple of repetitive riffs and all three band members providing the lead vocals as they hammer out their message of fighting against the stream. On the A side are a couple of bands I’ve never heard of, but both Traitre and Syndrome 81 are fantastic discoveries. Again, blurring the boundaries between say 80’s US hardcore and the French oi! sound, both bands have a passionate sound that on occasion reminds me almost of bands like Wipers or Adolescents, with solid tunes and some melancholic guitar and bass lines that lift both bands out of the ordinary. 4 excellent tunes and once again hats off to UVPR! Tom Chapman