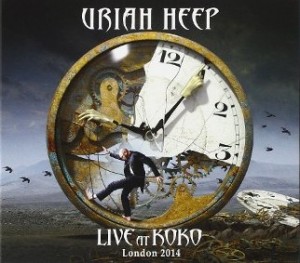 Uriah Heep – Live At Koko CD & DVD (Frontiers)
Recorded live in London, at the grandiose venue and made up of a 2 CD soundtrack it’s sure to be a well received package from Heep fans, or those attending the night. As one of the originators of hard rock, Heep have honed their sound perfectly and perform a concert in prestigious feel – note perfect and giving the crowd exactly what they want. Eighteen songs of unmistakable Mick Box riffage and classic Hammond hammerings Uriah Heep are a band that have stood the test of time and keep churning out rock belters. Sadly only one track (Overload) from the brilliant ‘Wake The Sleeper’ 2008 album surfaces during the performance, but debuting two songs (Can’t Take That Away, and One Minute) from the newly released ‘Outsider’ record confirms the band capabilities, as they blend in as if household favourites; UK progressive rock at it’s very best – loud, wild, and full of guitar. Pleasingly this recording has managed to keep the live sound you would expect, instead of the over polished studio treatment. Obviously the set list is bunged full of Heep classics, but would you have it any other way? Mark Freebase