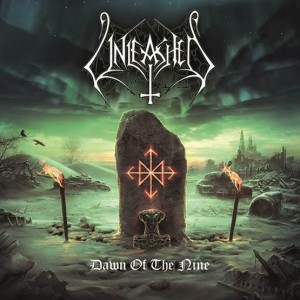 Unleashed – Dawn Of The Nine CD (Nuclear Blast)
Swedish battle warriors Unleashed return with their greatly anticipated new opus. Considered luminaries in the Viking death metal genre and with ‘Dawn Of The Nine’ being the bands twelfth album, it’s no surprise too most the presence they have created. Oozing with Northern mythology and Viking ancestry the seething power of the quartet is let loose right from the very start of album opener ‘A New Day Will Rise’ and almost as soon as ‘They Came To Die’ finishes its first verse the weighty rhythms will have you banging your head and throwing a fist bellowing “they came to fucking die!”. Bassist and frontman Johnny leads his troops with pure gusto, like a general into battle, delivering superbly old school chorus melodies, but sincerely intense heaviness compounding their beliefs thoroughly, all bought about by the song titles themselves. The superior guitar tone concocted by Tomas and Fredrik adds a splendid weight to the entirety of the ten songs whilst Johnny’s clattering bass has the power bought on by a horde of Viking horsemen! If you were to place Unleashed amongst a plethora of similar others they would surely emerge with strong recognition. Even the thrashers will embrace the speed at which Unleashed deliver some of ‘Dawn Of The Nine’. Mark Freebase