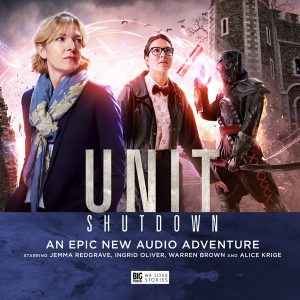 This second series of standalone adventures takes place directly after the events of Kate Stewart and Osgood’s first audio adventure Extinction, and sees the British division of UNIT under attack by mysterious alien warriors the Tengobushi, whose reasons for arriving on Earth are linked to a dangerous new initiative.

In part one: Power Cell, we see UNIT meeting the ambitious (and frankly creepy) Felicity Lyme, played with icy aplomb by Alice Krige. But who are Cerberus? And what are they doing in the London Docklands? Part two: Death in Geneva, goes somewhere towards answering these questions and reminds us that audio adventures have no travel constraints. Here we see the team leave the confines of London with Tengobushi assassins hot on their trail, forcing Kate and Osgood to retreat to UNIT Command in Geneva. In part 3: The Battle of the Tower the action really kicks off as the alien horde rises from the shadows while London sleeps. As if this weren’t enough to contend with (and where’s You-Know-Who when you need him, eh?) the Tower of London has been breached. Now it’s up to UNIT to defend their London HQ and hold the line. Without pausing for breath, the adventure concludes with part 4: Ice Station Alpha, where caught between greed and the seemingly unstoppable alien power, Kate Stewart leads the team on a final mission to the Antarctic. Yes folks, it’s the moment we’ve been waiting nearly 50 years for – it’s UNIT against the world!

The Tengobushi are a genuine threat here, feeling in some ways like updated, more threatening and far less camp Raston Warrior Robots (who, don’t get me wrong, I LOVE. I even have a Raston Warrior Robot mug). And, as with Extinction before it, in Shutdown we see UNIT presenting a proper, grownup force to be reckoned with. Kate Stewart and her team are light years away from their usual Dad’s Army-inspired antics (which, on television at any rate, make them look incompetent and a bit dim-witted), and there’s a feeling of genuine threat from the start. When the proverbial really hits the fan, the pace and excitement doesn’t let up. Exciting, exhilarating and with a proper international feel, this is a fantastic entry to the UNIT files.  Bex Ferriday