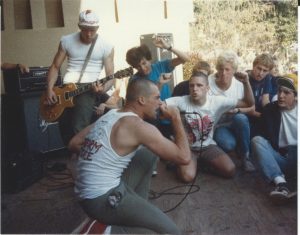 One of the greatest American hardcore releases of the 1980s gets the deluxe Southern Lord reissue treatment, with the January re-release of the landmark Screaming For Change classic album by UNIFORM CHOICE.

Screaming For Change was the debut album from Orange County, California’s godfathers of positive hardcore, UNIFORM CHOICE. Furious hardcore energy and a signature vocal delivery combine with empowering lyrical output to formulate one of the most renowned and longstanding albums of the ’80s hardcore scene. Originally released in 1986 on the band’s own Wishingwell Records label, vocalist Pat Dubar recently contacted Southern Lord with the desire to have an official re-issue of the classic album “done right” for their fans. After several unauthorized, completely sub-par bootlegs appeared Pat wanted a definitive version released to set the record straight!

The fourteen straightedge anthems on this essential piece of hardcore history has been remastered from the original tapes by Brad Boatright (Excel, Nails, High On Fire, YDI, Brotherhood), and the elaborate packaging includes a 8-page 12″x12″ booklet bound into a Stoughton tip-on gatefold jacket. There are a ton of amazing, never-before published photos from the personal archives of the members of UNIFORM CHOICE and their friends, and liner notes by longtime Orange County hardcore dude Casey Jones. This is a very special release that is not to be missed!