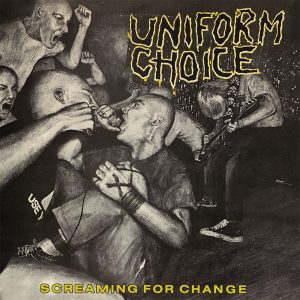 Few bands dare dream that they’ll ever make the same kind of impact as Uniform Choice did in their relatively short existence, and even fewer actually mange to attain the same sort of mythological status within the HC scene. One of the first Straight Edge bands to emerge from the West Coast, Uniform Choice played fast and incredibly melodic Hardcore in the same vein as their musical progenitors Minor Threat, and it was Screaming For Change, their debut album, that established them as a force to be reckoned with.  If it wasn’t for Uniform Choice there wouldn’t be an Ignite as they modelled their entire sound on this record, and if it wasn’t for Uniform Choice, the first Youth of Today album* wouldn’t have emerged when it did, as singer Pat Dubar released it on his label, Wishingwell, shortly after his own band’s debut was unleashed.  Screaming For Change may be thirty years old, but it sounds as incredible as it did the first time I heard it back in ’86 / ’87, bursting with energy and filled with insanely catchy songs and heartfelt lyrics, it’s the blueprint for just about every Youth Crew record that’s been released in the last three decades. There are few HC records that I regard as being essential, but this is one of them. It changed my life for the better, and it can do the same for you. It really could. Trust me… Tim Cundle

*I did things the wrong way around. I picked up Break Down the Walls first and only bought Screaming for Change because it was on the same label as the initial Youth of Today album.  Best blind purchase I ever made.