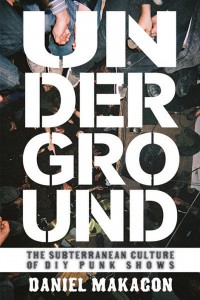 Underground – The Subterranean Culture of DIY Punk Shows – Daniel Makagon (Microcosm Publishing)
A scholarly analysis of the history and development of DIY punk shows in non-traditional settings such as house shows, community halls and shops during Professor Makagon’s time in the punk scene starting in the 1980’s and continuing to present day.

It’s quite a heavy theoretical book covering the ideas, politics and economics behind DIY shows and the contrast with traditional venues (bars and clubs), and why this aspect of punk culture is one of the most important in separating punk from other forms of mainstream culture.

Makagon covers the basics of putting on DIY shows and the historical perspective in which this culture came to exist, starting with MRR’s “Book Your Own Fucking Life” and covering some of the longest standing ‘punk houses’ in the US such as 924 Gilman Street, Mouth House and the DIYCHI collective, the author explores the challenges in creating an alternative venue structure for both bands and promoters.

At times it’s a little dry and reads like an MRR article; so if you’re looking for something along the lines of Tony Rettman’s “NYHC: New York Hardcore from 1980-1990”, then this probably isn’t the book for you. The focus is not so much on punk music as on the DIY ethic that underpins punk culture. However if discovering how to set up your own show is your thing, then the strategies and experiences Makagon covers in this book make it a worthwhile read. Ian Pickens