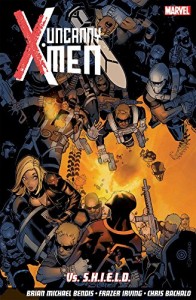 Uncanny X-Men vs. S.H.I.E.L.D. – Brian Michael Bendis, Chris Bachalo & Kris Anka (Marvel / Panini)
Just as things were starting to go back to normal and my heart rate had finally levelled out; after the adrenaline soaked, cerebral smashing events of ‘One Down’, Scott Summers and his band of mutant superheroes are back for another round of pulse pounding perilous adventure that pushes the X-Men further toward the increasingly real prospect of all-out war against S.H.I.E.L.D. And as if that wasn’t enough, ‘Uncanny X-Men vs S.H.I.E.L.D’ also delivers a shocking, cliff-hanger finale that darn near left me a quivering mess, desperate to find out what happens next and how it’ll inevitably change their world.

‘Uncanny X-Men vs S.H.I.E.L.D.’ brings the already escalating problems and tensions between both organisations (which, to be fair hasn’t been helped by the fact that Cyclops is still regarded as a ‘terrorist’ by the bastions of law and order) into the open, and as they face each other, the missiles, bullets and powers start to fly as each is manipulated into fighting the other by a Machiavellian third party dedicated to the wholescale destruction of both. It a battle that neither side wants, and as they edge ever closer to war, each must try and find some way of trusting the other if they ever hope to discover the truth about who wants them to burn each other from the face of the Earth. Which isn’t going to be easy, as Magneto gets to the bottom of Mystique’s secret, exposing and saving it (spoiler avoidance overload!) from Madripoor and in doing so, alters the fragile relationship dynamic between S.H.I.E.L.D. and mutant kind and the conduit between the two forever. And then there’s that conclusion, that denouement that’s drip fed to us throughout the book, the one that, on the surface, looks like it’s going to be a game changer. That’s worth tuning in for alone, but when you throw in the rest of the exquisitely rendered, full colour chaos and madness, well, it makes the book damn near essential, especially if you’ve, like me, developed an X-Men ‘habit’ since Bendis took up the reigns. Brilliant, just, y’know, brilliant… Tim Mass Movement