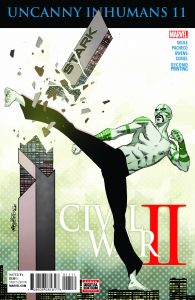 The announcement of the newest addition to the Marvel Universe has people talking! Marvel is pleased to announce that UNCANNY INHUMANS #11 – the first appearance of Mosaic, has sold out at the distributor level ahead of its release this week and will immediately return for a second printing. In advance of his new ongoing series launching this October from Geoffrey Thorne & Khary Randolph, see him in action as the Uncanny Inhumans descend into Civil War II! Following the events of the sold-out Civil War II #2 – creators Charles Soule & Carlos Pacheco bring Medusa and the Inhumans to Tony Stark’s doorstep and into the conflict! Don’t miss the fireworks when this new installment when it comes to comic shops this week in UNCANNY INHUMANS #11!