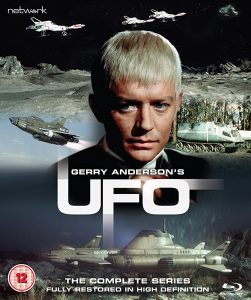 I bought a Blu-Ray player to do this review. A technological marvel not available in 1980. It’s a modest machine that cost £25 – likely what top-of-the range models would have cost in 1980 – or without VAT, £19.80. Just kidding. Because as these are the opening titles, as it were, of this review, how can I not keep mentioning 1980?

Because this, my friends, is UFO. Gerry Anderson’s bazzing and borderline bonkers virgin venture into live-action TV sci-fi. Twenty-six episodes of typical Century 21 world-building, though set unusually only a decade rather than a hundred years after filming in, you guessed it, 1980. Nonetheless, SHADO ticks all the right boxes as the great-granddaddy of WASP, International Rescue, SPECTRUM et al in more ways than one. Hidden base – check. Cool vehicles – check. Alien threat – check.

What? Listen, if you don’t get that last bit, then you need this box set, for it’s with that episode and others that UFO breaks the mould of other Anderson series. This isn’t just his first-time venture into live-action TVSF, it’s his first into adult TVSF. The result is a vastly engaging box of frogs of tragedy, politics, paranoia, internecine squabbling, jealousy, sex, drugs and rock n’ roll (well, disco, anyway), all intermixed with the heroics necessary to stop the (sometimes organ-harvesting, sometimes would-be world-conquering) aliens who are SHADO’s bane. This heady mix came as quite the surprise to ITV schedulers of the time, who, expecting the innocence of, say, Troy Tempest’s love triangle with Atlanta and Marina, or Alan Tracy’s stalking of Lady Penelope, had quite the tizz and treated the series badly indeed. Initially screened in the early evening slot, few regions screened it in its entirety, and, where they did, rescheduled certain of the ‘dodgier’ episodes into late-night slots. It was no way to treat a series, incredibly frustrating for viewers, and to my mind no wonder Ed Straker and Alec Freeman smoked like chimneys and drank like fish.

Now, at last, a chance to watch it whole. Yes, yes, I know I could have caught it on VHS or DVD, but never did. And I’m glad. Because the blu-ray was worth waiting for – oh my, yes – a sumptuous trip back-to-the-future with hi-def restorations from original stock and optional 5.1 sound. The episodes look stunning, giving one the chance to ogle Gay Ellis enjoy the men, women and machines of SHADO in quality hitherto unseen. I, personally, spent a good deal of time enjoying Colonel Virginia Lake, remembering how, back when, I’d wished for a few more years on my timeframe, so I could pop down to Elstree and have her babies, even if I was running the risk of becoming Benedict Cumberbatch’s dad.

But I digress. Here in its finest form is Anderson’s strangest series – one sadly curtailed in favour of the inferior Space: 1999 – and the psychedelic joys of episodes like Mindbender, Timelash, Ordeal and The Long Sleep, amongst others, await. Coupled with hours of extras including feature-length and other documentaries, a new recruits to SHADO briefing, extra and unused footage, TV spots, foreign trailers, voice sessions, fashion features, interviews, audio commentaries, extensive image galleries and – sadly unavailable to this reviewer – a 600-page – yes, six-hundred page – book on the making of the series, trust me, seen or unseen, this is worth your every penny. I’ll tell you how much: in honour of this beauty, I’ve called my blu-ray player SID.