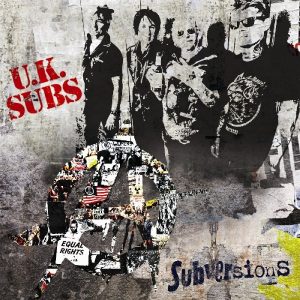 Releasing covers albums as way of paying tribute to the artists who influenced them, or acknowledging their contemporaries, seems to be the in thing with bands in all genres of music at the moment.  There’s barely a week that goes by without this band or that band releasing their heartfelt testimonial to the folks who inspired, and inspire, them and for the most part they mostly follow a similar blueprint, are incredibly predictable and are ultimately disposable and instantly forgettable. But the U.K. Subs aren’t most bands and in their forty something year existence have forgotten more about being punk rock than most bands will ever learn in ten lifetimes. So when they release a covers record crammed full of high octane rock’n’roll anthems, some of which you’ll know and some of which you won’t, you can bet whatever it is that’s most precious to you that you’re going to sit up, take notice and within a spin or two, will be getting down with your bad self, singing along with Charlie and frantically shaking your rear end to the songs the Subs have chosen to play. SubVersions is the Subs doing what they’ve always done, putting the punk in punk rock and the rock in rock’n’roll, albeit with other bands tunes. Taking on, and paying homage to, the Stooges, The Saints, Motorhead, Bob Seger, Bowie, the MC5, The Johnny Burnette Trio and more, SubVersions is one of those all too rare beasts, a covers record that’ll sail straight to the top of your daily playlist and hang out there for the foreseeable future.  Recommended… Tim Cundle