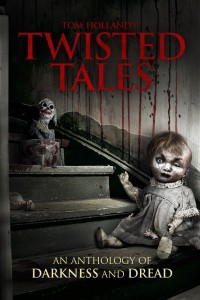 Twisted Tales (Bulldog Film Distribution)
For giving the world ‘Fright Night’, Tom Holland was, is and always will be “the man”, and even if it had been his sole outing into the annals of horror cinema, he’d be remembered, and revered, for delighting generations of fans (and transforming Chris Sarandon into one of modern cinema’s definitive vampires) with his tale of teenage obsession, love and nosferatu. But it wasn’t his only outing, far from it as he’s become something of a genre maestro, and when his latest outing ‘Twisted Tales’ arrived for review, I sat down, pressed play and prepared to have my sense assaulted in horrific fashion.

Okay, look, I know I said latest, but that’s not strictly true as ‘Twisted Tales’ actually appeared in 2013 as a web based anthology series broadcast by Fearnet. It is however, the first time that the entire series has been released on UK DVD, and when I say entire series, I mean the entire series, as all nine episodes that Tom has made up until now (the future of the series is still up in the air apparently – there might be more, there might not. Only time and the mysteries of TV and Net channel commissioning will tell) are included. Like a weird fusion of ‘The Twilight Zone’, ‘Tales From The Crypt’ and the portmanteau films that helped Amicus make its name in the early seventies, ‘Twisted Tales’ features a series of strange stories, each of which is introduced by Mr Holland in his own, inimitable Tom Waits meets Rod Serling style. As with any series of this ilk, the quality varies from episode to episode, but the good far outweighs the bad, with the lycanthropic narcotic meets seer action of ‘Bite’, the parallel world mystery of the good wizard versus bad magician shenanigans of ‘Mongo’s Majik Mirror’, the slice and dice internet “duel” ‘Cached’ and the “lets-summon-Satan-and-force-him-to-our-bidding” slow burn of ‘Pizza Guy’ (which for some reason I can’t quite put my finger on, reminded me of eighties back-from-hell-with-an-amp-turned-up-to-eleven metal exploitation flick, ‘Trick Or Treat’) being worth the price of admission alone. That said, the net based origin of the series and it’s budgetary restrictions are inescapable, and while they don’t have an overly negative impact on the quality of the show, if you’re expecting the big budget hack-n-slash drama of say, ‘The Evil Dead’ remake, you’ll be sorely disappointed. But if you’re a fan of ‘V/H/S’ and ‘The ABC’s of Death’ and are looking for more of the same, then you’re in for a real treat as ‘Twisted Tales’ is probably the Saturday night B movie that you’ve been searching for. It’s horror time… Tim Mass Movement