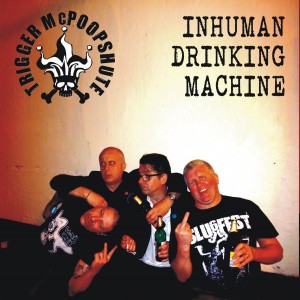 Trigger McPoopshoot– Inhuman Drinking Machine CD (Cockbox Records/Self Released)
Given the amount of alcohol this lot consume at every gig it’s amazing they were ever sober enough to record these 11 tracks; however as the title suggests these Abertillery Boyos have an almost inhuman capacity for alcohol consumption, and so we find ourselves in possession of this rather splendid collection of instant punk rock classics. Think Zeke rucking with GBH while drunk on White Lightning cider and your pretty much in the right territory. It would be a mistake to write off McPoopshoot as a joke band however, because despite the obvious comedic content of live favourites ‘Knobrot’ or‘Skidmarks and Spencers’, the band have honed these tunes in the live environment over the past five or so years, and the influence of their live peers (Sick Livers, Dirtbox Disco and The Chuck Norris Experiment) is definitely showing, with much tighter, dare I say it, musicianship and song writing on display. The audio equivalent of an episode of Bottom. Deliciously wrong. Ian Pickens