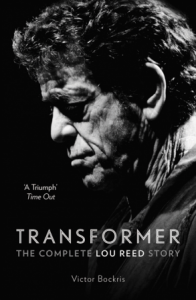 Transformer – The Complete Lou Reed Story – Victor Bockris (Harper Collins)
Bockris has already established himself as something of a scholar in matters pertaining to Lou Reed having co-authored ‘Uptight: The Story of the Velvet Underground’ with Gerard Malanga – a book credited with bringing VU to a whole new generation on its release in the ’80s.
‘Transformer’ is as comprehensive a biography as you could wish for; tracing Reed’s origins from the Jewish Suburbs of Freeport, Long Island, his electro-shock therapy (for which he never forgave his parents), his time as a freshman at Syracuse and first homosexual experiences there, his embracement of the seedier S&M soaked world of NYC and Warhol’s Factory and his subsequent musical journey from iconic Velvet Underground frontman and lyricist to household name (forever linked with the ironic use of ‘Perfect Day’ as a fundraising single for the Children In Need Charity). ‘Transformer’ culminates in his unexpected pairing with Metallica on the ‘Lulu’ album and his final demise in 2013.
Bockris’ work is both a celebration of Reed’s genius as a lyricist, producer/arranger, and an honest appraisal of his darker, misogynistic, control-freak paranoia. The author picks at the scab of Reed’s bisexuality/homosexuality and his resultant self-loathing and denial (particularly his renunciation of long term muse and lover ‘Rachel’ about whom he wrote the classic ‘Coney Island Baby’), and how in the final years of his life Reed found redemption in his soul mate, the performance artist and Buddhist Laurie Anderson.
The complexity of Reed’s character is mirrored by Bockris’ writing style which at times is as dense and disjointed as the sound of Reed’s music. It’s difficult not to develop a dislike of Reed, in particular the brutal and dismissive way in which he treated his first wife Bettye, his musical entourage and his family (excluding his younger sister Bunny – the sole person Reed appears to unconditionally love). His well-known feud with John Cale (which Bockris attributes to Reed’s jealousy of Cale’s musical genius) and dismissive attitude to the other founding members of VU (Sterling Morrison and the Reed’s one defender Moe Tucker) are also covered in great depth, as are his love/hate relationships with Warhol and David Bowie.
Despite Reed’s shortcomings as a man Bockris’ obvious love of Lou as an artist shines through, and the final chapters present Reed in a more sympathetic light, in which Reed himself appears to rediscover himself through yet another ‘transformation’ and his symbiotic relationship with Anderson. The book closes on a positive note celebrating Reed’s genius and the acknowledgement of his artistic genius almost 50 years into his career.
Bockris has done an outstanding job of not only detailing the factual account of Lou Reed’s life and death, but also getting under the skin of the artist to a degree missing from many biographies. Reed’s relationships are analysed at an almost psychological level; and while some may feel that Bockris has stretched or laboured some of his assessments of Reed’s motivations and neuroses, there is no doubt that his first-hand experience of Reed and the monumental body of interviews conducted in the course of writing ‘Transformer’ give credence to Bockris’ work. An absorbing if sometimes difficult read. Ian Pickens