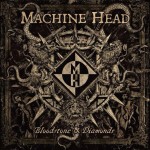 Bay Area metal heavyweights MACHINE HEAD released their new album Bloodstone & Diamonds a few weeks ago to rave reviews and critical acclaim. Reaching #1 in the iTunes Metal Chart, the album also hit #18 in the UK National Album Charts, as well as #21 in the US and #6 in Germany. In celebration of the release and their killer new video for the track ‘Now We Die’, the band have just posted a ‘making of’ trailer for the video over on YouTube. Watch the clip here:

Watch the official video for ‘Now We Die’:

The band have been posting trailers on their YouTube channel in support of the new release – watch the first two below:

“I feel like, growing up in the Bay Area, we were exposed to so much amazing music,” reveals MACHINE HEAD frontman, guitarist, and songwriter Robb Flynn. “Everything from this incredible thrash scene to this politically charged punk rock and rap scene… and all of that bled into what MACHINE HEAD became.”

Check out some song samples and album artwork on the band’s website HERE.

“I cannot even begin to tell you how proud we are of this album,” comments frontman Robb Flynn. “It’s been a heck of a ride, but man, this album is a milestone for us. You’re going to love it Head Cases.”

“Without getting too philosophical on ya, bloodstone and diamonds represent two of the hardest materials on earth, it is also a lyric from the opening track of the album ‘Now We Die’. In many cultures the bloodstone has been used as an amulet to protect against evil, and is the symbol of justice. Diamonds and are hardest natural material on earth (which is how we feel about our music), and it also represents the diamond logo I drew 22 years ago (in my wife’s apartment on Dover St. in Oakland) that has become the symbol for the band.”

Bloodstone & Diamonds track listing:
1. Now We Die
2. Killers & Kings
3. Ghosts Will Haunt My Bones
4. Night Of Long Knives
5. Sail Into The Black
6. Eyes Of The Dead
7. Beneath The Silt
8. In Comes The Flood
9. Damage Inside
10. Game Over
11. Imaginal Cells (instrumental)
12. Take Me Through The Fire

Along with ‘Now We Die’ the final album version of the advance track ‘Killers & Kings’ is available for download too. Pre-order the album now on iTunes to get both tracks instantly