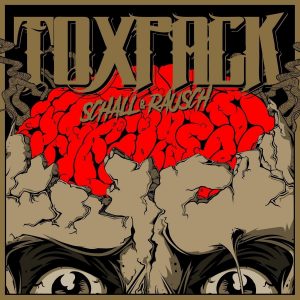 Whoever said “There’s nothing new under the Sun” had obviously never crossed paths with Toxpack before, because these dudes have gone and given the whole Crossover thing a decidedly different, slightly odd, but hypnotic and hugely enjoyable spin of their own making. They’ve forgone Thrash and Hardcore, travelling instead down a path forged by Street Punk and late eighties / early nineties Power Metal, and as weird as that may seem (and yeah, I know exactly how odd it sounds), the end product is pretty darn spectacular.  Toxpack are hard as nails and Schalll & Rausch is all about huge choruses and sing-a-long anthems that hit like a booze fuelled, blood soaked punch up between Loikamie and Attero Dominatus era Sabaton that pound their way into your skull. And just like a bunch of middle class crusties setting up a “protest” camp outside whatever it is they’re cross about this week, once they’re in there, they’re impossible to shift.  Schall & Rausch ist wunderbar…  Tim Cundle