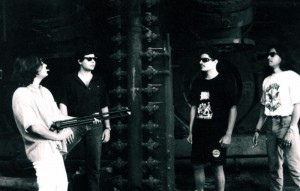 Chaos Records is proud to announce the reissue of Morbidest Reality (An Observation) from seminal Mexican Death Metal band TOXODETH. Originally released by Culebra Records in 1993, the long out-of-print sophomore release further cemented the band’s status as Mexican extreme metal trailblazers. The reissue contains 11 bonus tracks of unreleased material, demos, and live recordings, as well as a 16-page booklet that contains rare photos and flyers. The reissue was remastered by Dan Lowndes at Resonance Sound UK and comes with the revamped artwork and layout of Cesar Valladares (Under the Church, Eskhaton, Goddefied).

The album is streaming in its entirety at this location.

Morbidest Reality (An Observation) can be ordered by visiting THIS SITE.

TOXODETH was formed during 1984 with the aim to create original Death/Black Metal. After years of going to local gigs the band found that there was a lack of underground metal acts, so they took matters into their own hands and started playing Venom and Hellhammer covers. During this period (1983 – 1987) in Mexico nobody was playing this style of underground metal. Bands were of course playing standard heavy metal or rock and roll, but not the extreme music that groups like Venom were playing.

Eventually TOXODETH started introduce original songs into the set alongside the covers. Admittedly, the band weren’t the most technically proficient (much like Venom), but their passion and energy more than made up for it.

TOXODETH became the first band in Mexico to release an actual Death Metal recording in early 1988. Entitled Mysteries About Life and Death (Wild Rags), the album got them reviews, interviews, and airplay from a variety of European, South American, and North American media outlets. TOXODETH also became the first band in their country to have an international record label release an album in 1989 – a CD no less, which was extremely rare at the time. In 1993 Culebra Records (BMG) released their sophomore álbum, Morbidest Reality (An Observation), another rarity in the band’s increasingly legendary history. A low-budget video followed and was played on MTV’s Headbangers Ball, yet another first for the group.