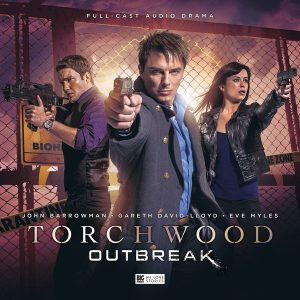 Has it really been a decade since Torchwood first appeared on the BBC, and five years since they last did so? While Torchwood’s tenure on television mirrored Neil Young’s Hey, Hey, My, My (Into the Black) in which he infamously sang, “It’s better to burn out, than to fade away”, thanks to both audio drama and literature, their post screen adventures have continued almost unabated, even though for practical reasons (such as featuring team members who later died on the job) most are set during the Earth’s last line of defence’s golden period. That is, the first ten years of the twenty first century. Not that I’m complaining, as I don’t mind admitting that I shed a little tear when Ianto and Tosh sacrificed everything in the line of duty and it’s always a pleasure to hear the full squad in action.  However, while not everyone is present in Outbreak, which is set between Series Two and Children of Earth, it does feature the powerhouse trio of Jack, Ianto and Gwen battling a hybrid alien / genetically engineered virus that having been let loose upon the streets of Cardiff, brings the city to the point of almost total collapse.

As with all Torchwood stories, Outbreak is a fast and furious drama that’s incredibly clever in design and execution that evolves in an intelligent, and for science fiction at least, all too believable fashion. Good Thinking, the virus that’s unleashed, was supposedly destroyed back in the fifties after Jack first stumbled across it and thought he’d taken it off the table, but like all of history’s worst monsters, it never really died. Exploited, updated and repurposed by a unholy alliance of government bureaucracy and corporate interest in an effort to provide a new medium for intelligence gathering, Good Thinking escapes quarantine and, slowly but surely, forces Cardiff to its knees in an unparalleled orgy of violence, brutality and death.  And it’s left up to the only three people who can halt its progress by any means necessary, to do just that. It’s time for Torchwood to save the world again.

Outbreak as well as being a classic Torchwood adventure involving extra-terrestrial technology, conspiracies within conspiracies and old secrets returning to haunt their keepers, is also an incredibly human drama as it further explores, and expands upon, the relationships that bond and tie its main protagonists together. It also takes a not so subtle swing at governmental policy and ideas concerning the privacy and rights of individual citizens and the way in which the snoopers charter, if it’s ever fully implemented, will reduce the populace to nothing more than numbers on a graph.  The cast, as they always do, slip back into their roles with unbridled confidence and ease and make the most of the well written tale, delivering a tour de force combination of performance and story that’ll convince even the most sceptical of non-believers (of which I am neither, I hasten to add) that Torchwood’s heart is not only beating strong, but that it’s still in the fight against any, and all, enemies of humanity, foreign or domestic. Ten years on and Torchwood is better than ever… Tim Cundle