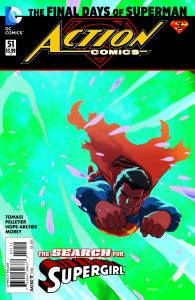 In the month of April the epic saga “The Final Days of Superman” began with Superman #51. This eight-issue story arc spanning four different titles sets the stage for the DC UNIVERSE: REBIRTH launch beginning May 25.

And now DC Entertainment is proud to announce that coming May 11th, all stories will be available with the new “Final Days of Superman” trade dress!

A second printing of the April titles including the sold out SUPERMAN #51, BATMAN/SUPERMAN #31, ACTION COMICS #51, and SUPERMAN/ WONDER WOMAN #28 will land in stores on May 11th, featuring a proclamation of their part in the monumental story.

The last four issues including BATMAN/SUPERMAN #32, ACTION COMICS #52, SUPERMAN/ WONDER WOMAN #29 and the grand finale SUPERMAN #52 will be released with the trade dress in their original print run.

So if you missed the beginning of this legendary story from superstar writer Peter Tomasi, never fear! You’ll get a chance to binge read it all before Superman takes his final bow.