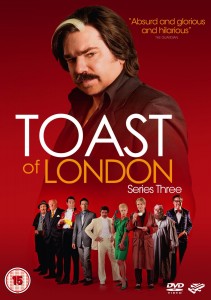 It takes a special sort of person to be an actor. To live a life treading the boards, dedicated to the craft, where the art is all and all that matters is the art. The dedication and commitment required ensures that only the most determined, those for whom theatre and show business is in their blood, succeed. Stephen Toast, is such a man. Voted worst actor in the world, and buoyed by his own self-belief, an endless supply of nonsensical voice over work and his half crazed agent, Matt Berry’s hysterically funny caricature of the profession, embodying all of its most ludicrous and far-fetched stereotype, is back. Navigating his way through a series of misadventures and trials, the misogynistic, womanising Toast is in fine form as he resumes his rivalry with acting nemesis Ray Purchase (and his affair with Purchase’s wife) and finds himself caught in a chain of increasingly surreal and bizarre events that propel him toward the avoidable, but seemingly inevitable, end of his career.

The third season of Toast finds our eponymous hero falling in love with a most unlikely partner, revealing the truth about the moon landings, judging a beauty contest that lands him in hot water with feminists everywhere, living in fear of his ex-wife’s forthcoming biography, being persecuted by Ray Purchase’s devilish older brother and finally getting his big break at the Globe which unfortunately, doesn’t go exactly to plan. Mixing highly imaginative and bizarre comedy with strange, yet incredibly catchy music, Toast inhabits a world of its own and follows its own uniquely hilarious path. Treading the same kind of comedic ground as Father Ted and The Mighty Boosh, albeit far filthier in terms of subject matter and content than either of its cousins, Toast is easily one of the funniest shows (thanks in no small part to the genius that is Matt Berry) currently inhabiting the world of the cathode ray and continues its rise to stardom, while getting better and better, with each series. Much like the finest of fine wines, it improves with age and long may it continue to do so… Tim Mass Movement