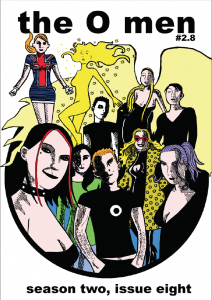 After battling their nemesis Anathema and her Vicious Circle it’s a very different O Men that we encounter.

The various O Men members have been shot, exiled and brain-wiped – but somehow they are all back! How? All will be revealed! Plus, something is seriously wrong with one of the team, Grace… Get yourself ready for a major shock when you discover what’s going on!

This release also includes an issue 7.0, a special mini-strip reintroducing all of the characters.

“I’m very excited to return to The O Men and finally finish the story I started over 15 years ago! I can promise some interesting stories ahead – and lots and lots of answers to the series’ biggest mysteries!” said creator Martin Eden.

The O Men #2.8 is available to read on your digital device from March 2, 2016 via ComiXology