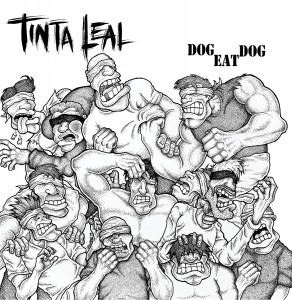 Tinta Leal – Dog Eat Dog EP (Self Release)
Four seasoned veterans from Konstanz in Germany play no-holds-barred attitude hardcore. This 6 track EP is a DIY release and has an American hardcore feel to it, especially in some of the titles of songs like “Bound For Life” and “Won’t Pay No Way” which are as if Agnostic Front wrote them. It’s clear that they are influenced by such bands with all the loyalty and sticking together, side by side forever in friendship crap which I can never get my head around.
It doesn’t take the Hardcore scene by storm but it is a good effort and there are some decent tunes on here with the best being the second track “Big Shot” followed by the end song “Won’t Pay No Way”. Simple songs but quite listenable. Paul Hoddy